The Annual General Meeting of Hong Kong Texas Exes will be held on February 25 starting at 6:30pm at Inn Side Out (https://www.openrice.com/en/hongkong/r-inn-side-out-causeway-bay-western-wine-r156122) located on the 2nd Floor of South China Athletic Association. As HKTX is now under the administration of the Interim Administration Unit (IAU), the AGM is going to be the only official activity of HKTX for the fiscal year. Grab the chance to meet our fellow alumni!

Experience tells us that our Texas Independence Day Dinner/AGM participants enjoy the event so much that they stay for a long time, and even talk in the street for an hour after leaving the venue. Don’t miss the chance to meet our fellow alums!

RSVP. See you there and may the ‘Horns be with y’all!

The election will also be held during the AGM. The IAU would like to invite our members to stand for election as the Executive Committee members of HKTX. The detailed requirements are listed below. IAU Chief Administrator Victor Nip will be the Election Officer. If you are interested to become members of the next Executive Committee of HKTX, please contact him at victor.nip@hktx.org. If you want to be a member of IAU in case no members stand for election, please also let Victor know.

Until next time, may the ‘Horns be with y’all! 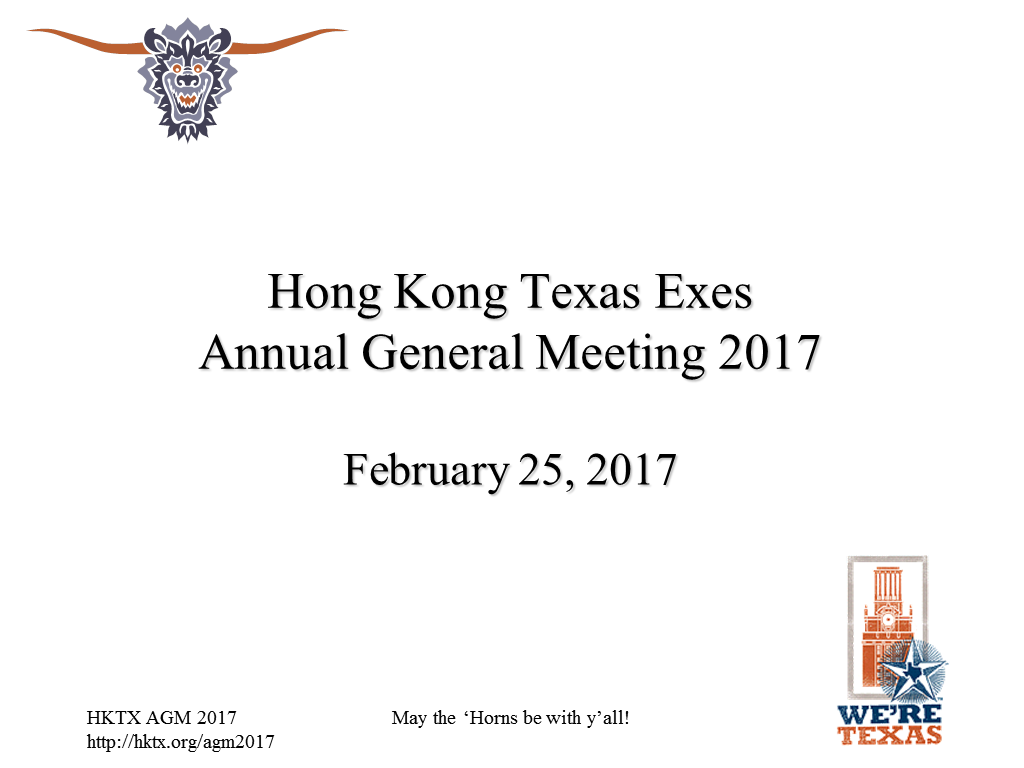 According to the Constitution of HKTX, alumni who have been members of HKTX for more than one year may stand for Election. Other alumni may also join the Exco as non-core members of the Exco.

The Constitution states that the Exco is elected or confirmed as a cabinet with 3 to 8 members.  A cabinet candidate is a group of members standing for election together to become the Exco.  An excerpt of the Constitution relevant to the Election is attached at the end of this message.

To run for an office, you may form your own cabinet candidate or join another one which is being formed. If you are interested to be an Exco member and want to join other candidates to stand for election, you may write to me and I will connect you with one, where available.

The term of the newly elected Exco will start 7 days after being elected and end on June 30 of the calendar year that follows.  HKTX will provide the resources for the elected Exco to meet the requirement set by Texas Exes.

4.4.4 The IAU shall perform the following duties:

5.5.5 If there are more than two (2) cabinet candidates running for election, the exhaustive ballot system should be used, and the whole electionshould be finished within the same meeting.

5.5.6 The out-going Executive Committee or IAU should appoint an Election Officer at least eight (8) weeks before an AGM to handle all election matters.  The Election Officer must be a Member who is eligible to vote at the time of appointment, and may not stand for election in the election that he is responsible for.  Announcement about the appointment should be sent out to the membership at least six (6) weeks before the election.

5.5.7 If for any reason no candidate is elected or confirmed in an AGM, an IAU should be elected immediately in the AGM.

5.5.8 If an IAU is to be formed at a time other than during the AGM, the Election Officer shall call an Extraordinary General Meeting for theelection for the formation of the IAU, subject to the provision of section 5.2.

5.5.9 All members with voting rights, including the Election Officer, are eligible to be elected as members of the IAU.  Each member with voting right may vote for up to the number of IAU Members to be elected.  Candidates with most votes are elected.  Lots will be drawn in case a tie-breaker is necessary.  Elected IAU members shall vote among themselves to determine who the Chief Administrator and Treasurer are.

May the ‘Horns be with y’all!